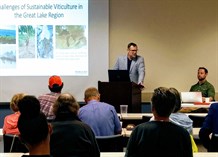 Suttons Bay, Mich.—Growing grapevines in the upper Midwest and New England is achallenging task in many ways. Winters can be long and quite cold; summers are often shorter than necessary to encourage full ripening of grapes; and too frequently there is an abundance of rain during some part of the growing season.

What to Do in the Vineyard After a Fire

Recommendations from Jeff Wheeler for your vineyard after a wildfire

Burned areas should be reseeded before the heavy rains come, especially in areas with any slope.  I recommend an erosion control blend of seeds, which will generally include annual grasses.

Salt Damage in the Vineyard

Insights on mitigating sodium chloride issues from Dr. Andy Walker of the Department of Viticulture and Enology, University of California Davis and Novavine viticulturist Jeff Wheeler 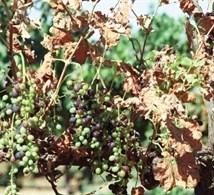 Saline conditions in both soil and irrigation water have always been an issue in agriculture. This is even more the case in semi-arid, drought-prone areas like California. Whether it’s sea water intrusion into existing wells, the higher concentrations of sodium and chloride in ground water as it recedes further downward, or the fact that new wells have to be drilled into less desirable aquifers, irrigation water is becoming more saline in many areas.

We know the alfalfa hopper was positively confirmed as a vector for GRBaV.  What is your opinion as to the possibility of other vectors?

Mysore: There are other members of family Membracidae in the vineyards.  It is possible that there might be more than one vector species that can transmit GRBaV.  We need research data to confirm this point.  Even if two or more tree hopper species turn up as vectors under laboratory/greenhouse conditions, their significance in terms of virus epidemiology in vineyards also needs to be determined.

Cation Exchange, pH and Base Saturation

Soil sampling is a critical tool for any farming operation.  It not only helps determine your fertilization plans for the following growing season, but it will also aid in determining the long term strategy for building sustained soil health.  This article will address three key parameters available in a soil test that best aid in improving agricultural soils over the long term, and also have relevance in the short term.