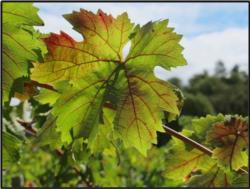 We know the alfalfa hopper was positively confirmed as a vector for GRBaV.  What is your opinion as to the possibility of other vectors?

Mysore: There are other members of family Membracidae in the vineyards.  It is possible that there might be more than one vector species that can transmit GRBaV.  We need research data to confirm this point.  Even if two or more tree hopper species turn up as vectors under laboratory/greenhouse conditions, their significance in terms of virus epidemiology in vineyards also needs to be determined.

For many years there has been speculation of vine to vine transmission of viruses, such as LR3, mainly through root grafting in grapevines.  What is your opinion on this form of vectoring of viruses, GRBaV in particular?

Mysore: You have already indicated that LR3 transmission by root grafting was a speculation.  I failed to see any scientific evidence to support this theory in case of LR3.  Root grafting has been shown to be a way of virus transmission in case of several perennial crops.  This is certainly a route in orchards planted with stone fruits.  My search using Google scholar indicated that the viruses suspected to be transmitted this way were invariably capable of mechanical transmission.  One grapevine virus in California that may fall into this category would be Grapevine fanleaf virus.  Even for this virus, there is no documented evidence of transmission by root grafting between grapevines.  GRBaV is not known to be transmissible by mechanical inoculation and thus may not get transmitted by root grafting.

We know there are two distinct clades of the GRBaV virus.  Do you have any further updates on these clades, or strains?  Do you see one being vectored easier or quicker than the other.

Mysore: We are working on this at this stage and experiments are in progress.  The field study we have planned may take several years to provide the data.  Based on available data, it appears that Clade 2 isolates are most widely distributed.  Based on this one can assume that Clade I is less efficiently transmitted.  Again, there is no data documented that can distinguish from infection due to contaminated planting stock from those due to transmission by a vector.  I need to emphasize that we still need to document data for transmission by vectors under vineyard conditions.

We have noticed in some areas of the state that the virus seems to move faster than others.  Do you see this as well and what do you feel are some of the reasons behind this?

Mysore: The only thing that seem to correlate well with the virus spread is the presence of riparian areas and irrigation reservoirs in or close to vineyards. It is tough to separate the grapevines that came to the vineyard as grafted versus those that got infected at the site.  All the blocks where we had a base line for the diseased grapevines were removed.  We started monitoring again since last year.  At this stage, we do not have sites where we have clear documentation of spread rates.  Also, we need to be aware vineyard practices that can influence the spread in a given location.  Prevalence of vector species and their off season hosts, pest management practices, location of riparian areas, irrigation reservoir, cover crops, use of machinery and sprays that can potentially influence probing behavior of the vectors.

I know that certain viruses will express more or less, depending on temperature, GFLV and Fleck, to be exact.  We are seeing that certain areas have no issues with ripening GRBaV positive fruit.  Do you feel that GRBaV might have a temperature dependency?

Mysore:It is very likely that GRBaV might have a temperature dependency.  However, we need to separate the effects of virus on vine performance into different categories and consider each one from the point of vineyard productivity.  These are (1) symptoms, (2) yield parameters, (3) TSS content, and (4) wine quality indices (I am not an expert on this to list them individually).  We have noticed that the RB symptoms can vary with temperature, but during these years we also had a drought.  The unpublished data that we collected in a winery in 2012 and 2013 indicated year to year difference in TSS content in the same vines.  This was also noticed at Oakville station also.  We have also noticed that RB symptoms are pretty similar on a given cultivar whether it was in North Coast, Foot Hills or Central Coast.  We all know that these regions do not have the same weather conditions.  On some cultivars we have noticed effect on fruit yield in some locations, but this may not be factor in the North Coast where the crop is thinned to produce quality wine.  TSS is one parameter that generally dictates the harvest time. It is possible that some areas where RB was noticed, the fruit had no issues with maturity.  Were those with RB and without RB had the same TSS even though both were over 24 °Brix (required for wine making)?  What about other wine quality parameters?  I was told by a winery that even though they did not see much of a problem with the TSS, there were differences in anthocyanin and other volatiles.

What is the life cycle of the alfalfa hopper, and where and what stage do they overwinter?

Frank: There is little data on 3CAH on grapes and very little from alfalfa California, so what we know comes primarily from crops in the southern US. From those studies, it would seem that there might be 3 generations a year, and in those studies some say that they overwinter as eggs or as eggs and adults. We have been intensively sampling a vineyard in Oakville weekly since March to determine more about the life cycle and will also be sampling a couple of sites with different weather patterns over this winter to try to determine how they overwinter.

What is the cover crop impact on hopper populations in the vineyard?   Legumes vs grasses?

Frank: We are initiating a study of different cover crops for this winter that will allow us to begin to answer this question – especially legumes vs grasses vs others. We assume that cover crops will influence 3CAH populations in vineyards, but the impact may be positive or negative depending on how they are managed. There are no data at all on specific impacts or management.

What would you recommend as far as chemical control of the pest, material and timing?  Organic controls?

Frank: What chemicals that are effective are known from studies on alfalfa, soybeans and peanuts in the south. Many of these chemical are either not registered on grapes or are not things that we would want to use because of their toxicity profile to beneficial organisms. We are doing a small study at this time to determine if there are chemicals that might be a good fit to the grape system, and hope to do more next year. In terms of optimal timing, that is not known since we are only now learning about biology of the hoppers in grapes.

How efficient do you feel the hopper is as a GRBaV vector?

Frank: We have only begun to determine parameters for acquisition, persistence and success of transmission as related to time of year. It will take some time be able to answer this with any precision.

Is the alfalfa hopper a phloem feeder, or xylem, mesophyll etc.?

Frank: It is primarily a phloem feeder.

Many growers have noted the absence of alfalfa hoppers in vineyards where GRBaV seems to be spreading at high rates, do you suspect another vector of the GRBaV?

Frank: 3CAH occurs at quite low densities in vineyards, even those that we have sampled where there is documented spread, so it is very easy to overlook them. It is easier to find the girdles that they make when feeding on the vines, so that is a better indication that they are there. However that is a less than optimum way to sample for management purposes since they have already been feeding. They are not very attracted to yellow sticky cards either – we have been running them all this season and the cards do not reflect the population that is present. We do not know of another vector, but are currently conducting transmission studies of other treehopper species that we have seen in vineyards.