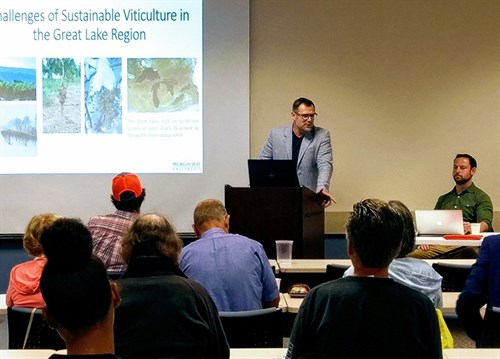 Suttons Bay, Mich.—Growing grapevines in the upper Midwest and New England is a
challenging task in many ways. Winters can be long and quite cold; summers are often shorter than necessary to encourage full ripening of grapes; and too frequently there is an abundance of rain during some part of the growing season.
One consequence of these conditions is the pressure from diseases such as downy mildew, powdery mildew, botrytis and bunch rot. It is not unusual for growers in a wet year to have to spray more than 15 times between bloom and harvest.
Reducing the use of pesticides is a good idea from several standpoints: it’s cheaper, takes less labor in the vineyard, and makes the vineyard more sustainable. And now horticultural researchers are making serious progress in developing new varieties that are more disease resistant or locating those grapevines that are genetically more resistant.
Paolo Sabbatini, an associate professor of horticulture at Michigan State University, received his doctorate from the University of Ancona in Italy and is well-connected with the viticultural research community in that country. He and Thomas Todaro, extension viticulture educator with Michigan State University, organized an international symposium on “New Cultivars for Disease Resistance and Increased Sustainability” on Aug. 29 that featured speakers from Michigan, California and Italy.
One speaker, Clizia Villano, who is an assistant professor at the University of Naples, Italy, specializes in research at the molecular level. Villano’s research involves the interaction between powdery mildew and a grapevine’s genetic background, and she has found that some grapevines may have genes that help the vine resist powdery mildew. Her objective is to make the defense-oriented pathways more active after powdery mildew infection by crossing vinifera vines to be more resistant.
The primary focus of the symposium, however, was on the work of the Vivai Cooperativi Rauscedo (VCR) breeding program and the resistant cultivars they have developed since Vivai Cooperativi was founded almost 100 years ago as a grapevine nursery. The goal of the VCR, which is located in the small village of Rauscedo just west of Udine in northeast Italy, is to provide vines for healthy, long-lasting and profitable vineyards, and over the years, they have provided grafted vinifera vines that meet those goals. Novavine, a nursery in Santa Rosa, Calif., has a license to propagate the new cultivars in North America.
The University of Udine began a breeding program in 1998 that focuses on disease resistance in grapevines so that the use of pesticides can be reduced, and vineyards can become more sustainable. The program has released 10 varieties which are now on sale from VCR. According to Enrico Peterlunger, professor of viticulture at the university, these vines have been planted in Eastern Europe, central and southern Russia, and China. When asked about the cold tolerance of those vines, Peterlunger replied that while they were bred to be disease resistant, the vines also appear to be more cold tolerant than expected.
The symposium concluded with a tasting of wines made from the VCR grapes, including four white wines —Sauvignon Kretos, Sauvignon Rtyos, Fleurtai and Soreli — and a Cabernet Sauvignon and Merlot.
Joe Juniper, owner of Vermilion Valley Vineyards in Wakeman, Ohio, commented on Facebook that “the wines I tasted were amazing. In a blind tasting even the most refined tasters would not be able to pick out these guys from their traditional parent counterpart.” Juniper noted that while the grapes are bred to be resistant to downy and powdery mildew, the fact that they have loose clusters may help to lower the amount of Botrytis and bunch rot that occurs as well.
According to Sabbatini, the VCR selections have been through the cleaning process at the National Clean Plant Network and some vines should be available next spring. Larger numbers of vines will be ready for the 2020 growing season.
Copyright © Wines & Vines
Reprinted by permission
« Older